It is the year 201X, and the Nebulaverse fandom is on fire. You are a teen online, and your safe place is about to be torn apart.

A Paradox Between Worlds is a game about fandoms, internet melodrama, and the stories we create for ourselves.

This is the version of the game that was submitted to IFComp 2021. The post-comp release is in progress.

Ranked 10th out of 71 at IFComp 2021. Also received the "Golden Banana of Discord" for the game with the highest standard deviation of ratings.

"A Paradox Between Worlds is a very powerful and sympathetic piece of work, and worth anyone’s time." - wisprabbit

"left me thoughtful and distressed... a masterpiece of technical work" - Mathbrush

"a quite astonishingly accomplished piece of interactive fiction" - Viv Dunstan

"In the despair, can you cling to each other, rebuild safety between each other? What happens when the online world proves as dangerous and hateful as the real world?" - kaemi

"In the end, it’s a very human game. It’s human to read, and to seek others to read with, and A Paradox Between Worlds honors that humanity at every step." - Lava Ghost

Discussed on The Short Game podcast

oh my gosh i've always been extremely involved in fandoms even though i was never really a tumblr user and this game made me SO NOSTALGIC. it was super fun engaging with the nebulaverse as a fandom blog, and it was very funny to me that no one ever cared about my blog because i chose tycho as my favourite character and decided that tychonova would be my favourite ship. tycho you have at least one fan and it is me

i especially loved the fanfic sections!! i wanted so badly to be able to continue writing my silly little fanfic but i felt so guilty about continuing to actively engage with the content

i love love loved luna and karla as characters as well. i can't articulate all the reasons why (though part of it might be bias because i'm trans) i'm sorry my brain is fried but i really loved them

sorry this was just word vomit my thoughts are so all over the place but!!! this was wonderful and i'll definitely be back to replay and explore more of the different options. thank you so much for sharing <3

It's interesting how I knew exactly what all these pieces are, huh. It's not too subtle. But it hits, kinda. I wanted to be able to tell Luna that I was trans too, at the end.

This is not a game that is subtle with its references and allusions :)

Suggestion noted on being able to tell Luna that you’re trans. It might be implemented whenever I release the expanded edition.

i really liked this :-) as someone who grew up on the internet around fandom spaces (i've been on tumblr for 10+ yrs... lol) this felt really nostalgic. the very distinct pre-dashcon kind of posts here really took me back, hahaha.

i've never been directly involved in this kind of thing but again, i've been around long enough to have seen it happen a lot of times. it feels particularly poignant with recent events...

i feel like even beyond the fandom/tumblr aspect this is something a lot of people can relate to - just in general getting older and learning new things about the world & yourself and then revisiting old media you remember fondly only for it not to be the same, or even painful.

i read some of your postmortem and i did seem to miss a few pieces of the story - probably because i didn't reblog enough, or follow karla's lead about stella. i did get the luna ending though !! your reflections on your work was really interesting to read. the "this isn't your story" in particular really resonated with me.

i think my favorite part was actually the fanfic sections. choosing to keep writing or to stop, grappling with it and coming to end that may not be satisfying... it felt relatable & authentic. i also liked how you used the CS themes to differentiate the sections - i've actually never seen someone do that with CS, though that may just be due to the kind of CS games i've been reading.

a lot of the times when i read something that revolves around tumblr/"fandom culture" i don't enjoy it. i don't know, i think it just makes me embarrassed, hahaha. i think since i was //there// when it all happened, it makes me more critical when people try to recreate it, especially when it's clear they weren't //there//, if that makes sense. and in some work it feels very dated, referencing tumblr.

obviously the latter isn't really applicable here, since that's what the game revolves around. but i really did enjoy it. it felt authentic (how many times can i use that word lol) and the characters reminded me exactly of the people i used to know in the internet space, and still see every now and again. and it's refreshing to see fandom explored like this, from a marginalized perspective, and how it can be both an escape & safe haven as well as a space that actively harms the most vulnerable people - it's something i feel like is excluded a lot in fandom-focused media. it was all very bittersweet.

thanks for making this and sharing :-)

This was wonderful to read; thank you so much! And I’m glad you read the postmortem :)

I really enjoyed this. I wasn't into Tumblr in this era, but I've watched enough of a YouTuber to have an idea, and I think you nailed the feeling. At the very least I can instantly tell it feels like the internet in that era. I see myself massively in Karla, in like every action. It, it made the story more real. All of the little things did that. Everyone had a distinct realistic voice and it had the bad uncomfortable stuff, it just sells it so well. I don't know what more to add. I read the postmortem, so I know you're kinda conflicted with how it turned out, but I think it did what was intended better than anything else could.

Oh, and you may find it interesting, I was pretty conflicted when trying to come up with a blog name. I just couldn't think of anything. But, then a line from a song I like popped into my head, since I use it as the "about" for my discord account, "And the wind I know it's cold", so I went with that and really liked it. Felt very Tumblr. Then I ended up turning out to be a Keeper of Wind who likes Luna, the Auger of Ice. So clearly it was fated. Also I now use it for my actual Tumblr, to fit the aesthetic of the site more than my previous one :)

Wow, thank you so much! Also I just heard that song for the first time because of this comment.

Assuming you found the right thing, I do feel it's worth mentioning for the sake of being responsible that she's, uh, kinda problematic :/. Not anywhere near GTM levels but not great... In any case I hope you liked the song. I was kinda worried about putting the specific lyrics, that you or someone else would look it up and then do digging and a mess would come of it. And I realize as I type this that bringing it up is only going to lead to that but I'm too stubborn and too far in to not send this reply :///

This was very good. Thank you for making it. I accidentally stayed up all night reading/playing it.

Hey! Just wanted to pop in and say I enjoyed the game. The 'layer' aspect of it is really cool, though, as a purely personal preference, I favoured the blogger perspective. I also thought it was all hyperreal!--the script was well-written and eerily believable, and all the characters seem interesting (I've only gotten Luna's end so far). Thanks for making this game, dev. 'Pageant' was a gem, so I'm glad to see you making even more cool stuff. Rock on :)

Thank you so much! I’m really happy you enjoyed this game and Pageant!

Maybe it's just because I haven't finished yet, but I think I'm unclear on some things, and it's making me not sure how I want to progress. Am I myself, Gali, or both? Am I some kind of magical superhuman who just pretends to be a normal teen? Do people actually have magic in this world? Is Gali my alternate identity, my actual identity, or someone else entirely? Are these events actually occurring, or is someone just writing it? Am *I* the writer?

You *are* the writer! Gali in the "Universe - Noncanon" segments is your fictional character! Those are fanfiction segments for the Chronicles of the Shadow Nebula. In the fictional Nebulaverse, people do have magic, although the "IRL"/"Online" world is basically our world.

Ohhh, ok. I think I'm not the intended audience then, because Gali is absolutely nothing like me so wouldn't be close to self-insert, even with fictional-world modifications.

Yeah, I don't have to, but if I don't, then I'm kinda just... not at all invested in any choices relating to her. I don't think that's anything against the game, I'm just not very interested in that style of game. (Also -- they? I thought Gali canonically used she/her pronouns. Maybe I misinterpreted.)

Okay, um... I'm going to try to explain the game a little here.

There are three layers to the game: Online, which is where the blogging takes place and is the bulk of the game; Universe - Canon, which is the "canon" Chronicles of the Shadow Nebula written by GTM (it's a story-within-a-story without choices since it's already written), and Universe - Noncanon, which is where all of the fanfiction goes (which is a different story-within-a-story, with choices). Magic exists in the Chronicles of the Shadow Nebula; both the Canon and Noncanon universes include magic and stuff, as the Noncanon universe is built off the Canon universe.

In the Canon Universe, Gali is a (presumably cis) boy and is the main character of the story. In the Noncanon Universe, Gali can be any gender. The first fanfic shown, Luna's fanfic, has Gali as a trans girl. The PC's fanfic doesn't have to follow any of those. In the PC's fanfic, Gali is just a perspective character; they don't necessarily have a set personality. I'm going to be working on this for the post-comp release, which will hopefully have more options for defining Gali's (and everyone else's) personalities in the Universe - Noncanon.

Also, the Universe - Noncanon parts of the story are less important overall than the Online segments, and they can be skipped later on.

Sorry, is this too complicated? 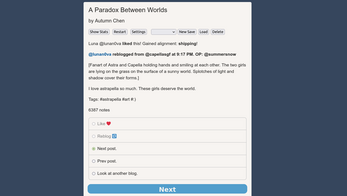 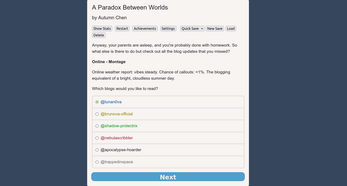