Social gatherings are not your preferred activity. But this one is obligatory, and it threatens to ruin you.

You are Karen Zhao, a senior in college who is home for winter break, and seeing your old high school friends for the first time in years. You are not ready, not even close, but perhaps you could make the best of it.

Two endings, many paths to arrive there.

This is a sequel to Pageant, but it should not be necessary to have played it.

Nominated for Best Characters and Best Writing at Spring Thing 2022

"NYE, 2019 is a great portrait of this age, for these particular characters, with powerful secondary themes underlying the main conceit of social interaction as an optimization problem" - Dawn Sueoka

"But you know what? It really does feel like that, when you’re eighteen, nineteen, twenty. New Year’s Eve, 2019 captures exactly the melancholy anxiety spiral that led me, like Qiuyi, to bail out early or mumble my way head down through a deeply draining evening." - Kaemi

"Zhao isn’t a protagonist I’d actively root for. She’s the kind of character that’s hard to look dead on at- the kind that I usually turn around from and cover my face, or close my eyes and cringe, sucking in a sharp breath- because the second hand embarrassment can be agonizing. At the same time- I think that she’s capable of provoking such a visceral reaction speaks quite highly to Chen’s writing abilities." - Sophia de Augustine

"I will say that New Year’s Eve, 2019 is a game in which the experience of agency is crucial to the experience of the story. It is one thing to watch someone fail again and again, and it is another thing to feel responsible their failures." - Drew Cook

I loved Pageant, so when I saw this was the sequel, I had to play it! This was a really lovely little meditation (probs not using that word in the right context) on socializing and human relationships, as well as a perfect example of why the phrase "distance makes the heart grow fonder" isn't exactly correct. It was all very relatable and this was a wonderful game. (I probably make little to no sense right now because my brain feels like tenderized chicken meat, lol.)

Played Pageant and this one, really great the whole way through!

[Spoilers below!! at least how I played it]

The awkwardness of our heroine through the party, the quiet moment with Emily outside (which was very cute btw!), the sense of doom I felt when people started talking about politics at the table haha, and sealing it all off with a New Year's kiss/hug (and the noncommittal "it was fine" in the car w/ mom). Great scenes that felt very relatable!

I like your writing style a lot. A mix of introspection, overthinking, and realistic dialogue that I think fits the story you're telling well! Looking forward to your future works :) stay safe!

yes. good, good stuff. also shoutout to another Hennessey fan. I bet I butchered that.

this felt so nice to read. i enjoyed the pacing and how you portrayed the awkwardness and insecurities.. it makes me happy to see and relate. thank you for creating this beautiful little story. ♥️

I really enjoyed the commentary on conversations as transactional, which is sort of the perfect thing to explore in a choice-based game like this. I thought this was a really lovely vignette that conjured all the complicated emotions of a big holiday like New Year's and I'm glad I took the time to play it. 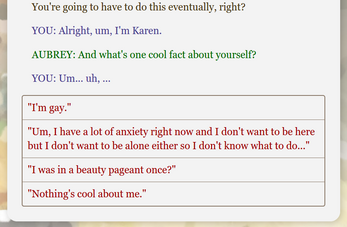 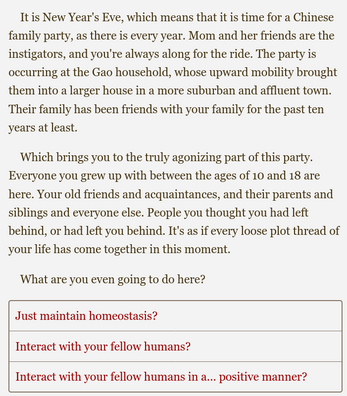 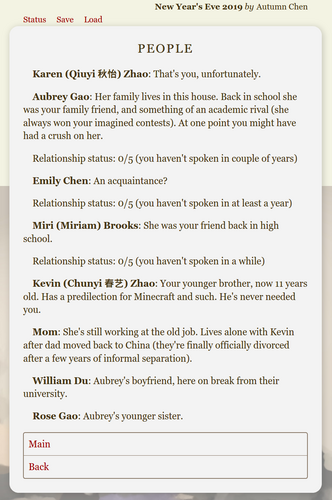